23 Business sectors subject to security and order conditions in Vietnam

DECREE 96/2016/ND-CP: PROVIDING FOR SECURITY AND ORDER CONDITIONS FOR A NUMBER OF CONDITIONAL BUSINESS SECTORS

23 Business sectors subject to security and order conditions and scope of management: 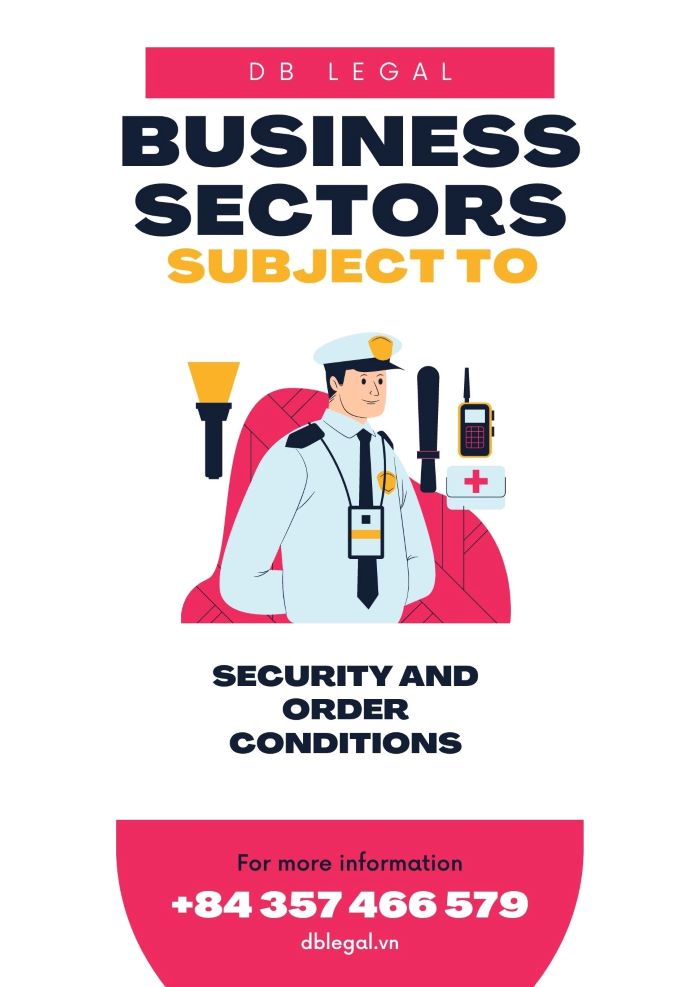 1. Seal production, consisting of the Production of the seals bearing the National Emblem of the Socialist Republic of Vietnam, the seals bearing symbol as well as those without it by regulations of the law on management and use of seals.

3. Firecracker trading, consisting of Production, processing, import, export, and trading in fireworks, other firecrackers, and powder by regulations of the law on the management and use of firecrackers.

4. Pawnshop services, consisting of Providing loans to borrowers who must put their legitimate property on a ledge at pawnshop service providers.

5. Massage services, consisting of the Use of physical therapies for massage or manual therapies to improve human health.

Massage services provided by health facilities for medical treatment and employment centers for providing jobs to the disabled are not governed by this Decree.

Security services which are provided to protect subjects/objects under the Government’s List of subjects/objects protected by People’s Public Security Forces and People’s Army Forces, and security activities at agencies or enterprises as referred to in the Decree No. 06/2013/ND-CP dated January 09, 2013, providing for the security at agencies and enterprises are not governed by this Decree.

10. Debt collection services, consisting of Collection of debts in cash or kinds for agencies, organizations, or individuals under authorization contracts.

Research, development, and testing of industrial explosives are not governed by this Decree.

17. Blasting services, consisting of the Provision of services with the use of industrial explosives to serve the construction of works, exploration, and exploitation of minerals and petroleum to agencies, organizations, or individuals on their legitimate demand.

18. Printing services, consisting of Prepress, press, and post-press activities (except for screen printing establishments and photocopy establishments) for producing the following products:

a) Publications (except for Braille books, audio or video recordings which are used as substitutes or illustrations for books);

b) Newspapers, magazines, and other press publications as prescribed by the press law;

e) Financial invoices; papers with a pre-printed face value or for the inscription of face values.

19. Trading in mobile phone jammers, consisting of Production, import, export, and trading in devices used to prevent mobile phones from receiving signals from base stations.

20. Plastic surgery services, consisting of Using medical techniques to perform surgery for alternation of shape or appearance of body parts.

a) Karaoke services, consisting of Singing activities along with prerecorded music with images or with aid from other audio and video recording technologies;

Activities of dance classes are not governed by this Decree.

22. Accommodation services, consisting of Accommodation establishments as referred to by regulations of the Law on Tourism and other types of accommodation renting services (on an hour or overnight basis) provided on the land or cruise ships.

Leasing of houses by organizations or individuals to Vietnamese people or foreigners (with house lease agreements) for residence, study, or working is not governed by this Decree.

23. Trading in military clothing and equipment of the armed forces, military weapons, technologies, devices, and vehicles for the military forces and police forces; parts, components, supplies, specialized equipment, and technologies for manufacturing thereof, consisting of:

a) Production and trading of military clothes and hats; army badges and insignia of People’s Military Forces and People’s Public Security Forces;

b) Production, assembly, import, export, trading, transportation, and repair of small-size military handguns as referred to by regulations of the law on management and use of weapons, explosives,  combat gears, radar speed guns to inspect the speed of motor vehicles, breathalyzers, GSM phone trackers and other types of phone trackers.